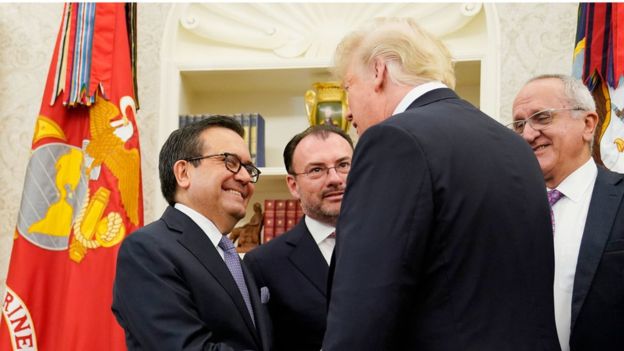 With rising pressure to complete renegotiation of the “North American Free Trade Agreement”, President Trump has now came out and said that common ground has been reached between Mexico and the USA. With Trump announcing the the supposed breakthrough on Monday. While 2 out of the 3 relevant figures are happy with the current agreement, Canada, the third country in the treaty, has not yet signed off, putting the final outcome of the whole agreement in doubt.

All of this follows from a years worth of talks, all of which were triggered by President Trump himself threatening to pull out of the pact due to his feelings that the trade agreement itself is the cause of a decline in US manufacturing job, especially in the auto industry, which has had a heavy decline, with cities such as Detroit, which relied on the auto trade, going through seriously tough times.

Now, trump has come out to say that US and Mexico have now agreed terms for this new agreement that, in the perspective of Trump, are far more fair and the terms making for an “incredible” trade deal.

Canada has not been participating in discussions regarding the trade deal for a few weeks now, US officials expect them to resume talks with the US and Mexico shortly though, now we are closer to an agreement. Trump has come on to say that he would be willing to strike separate, as he is not committed to the three-country agreement. Trump also has a strong desire to get rid of the name Nafta, which Trump says has bad connotations.

“We will see whether or not we decide to put up Canada or just do a separate deal with Canada,” – Trump, regarding Canada’s place in the agreement.

The clock is on though, with negotiators wanting to strike a deal before Andres Manuel Lopez Obrador, the newly elected Mexican president, takes office this December, but with all the policies such as the fact the negotiators must present the deal to the US Congress at least 90 days in advance, the race is truly on, with the deadline being the end of this month!

Canada and the US have always been at opposite ends on many trade matters, but depending who you listen to, the country is “encouraged” by the progress made so far, yet have not made any official comments on any official terms.

“We will only sign a new Nafta that is good for Canada and good for the middle class. Canada’s signature is required,” – Adam Austen, regarding the Nafta deal

While Trump is happy to leave Canada out of the deal, current Mexican President Enrique Pena Nieto stressed the importance of an agreement that includes Canada.

With the deal covering a lot of annual trade between the three parties, everyone is hoping for a beneficial trade deal that aids them and their country, but with tensions rising, what will be the final outcome of this deal?