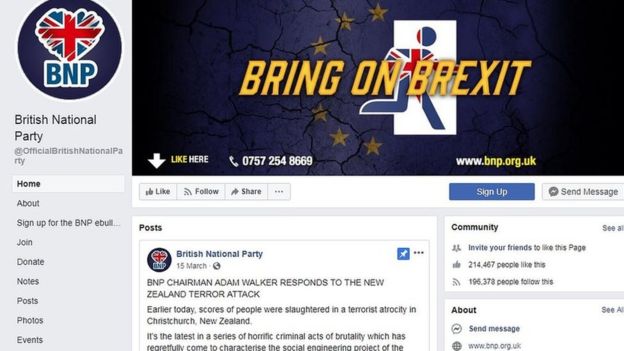 Facebook has imposed a ban on a dozen far-right people and organisations it states “spread hatred”.

The ban includes Nick Griffin and the British National Party, the English Defence League and the National Front.

This activity will prohibit support to it on some of the services of the US firm, although the listing also features Britain First, that has been banned.

It stated it had taken the action since those involved had proclaimed a”abusive or hateful mission”.

“People and businesses that distribute hate, or assault or phone to the exclusion of other people on the grounds of that they are, don’t have any place on Facebook,” the societal media included in a statement.

A spokesman for Facebook explained what could be achieved to the pages people and that the groups had run onto its website. All those will be prevented from having an existence on almost any Facebook service.

Additionally, support and compliments for persons that were named or those classes would be permitted.

“For too long social networking firms have been easing extremist and hateful content on the internet and profiting from your toxin,” she added.

“They have failed on far-right extremism since they don’t have the exact same co-ordination strategies for platforms to operate together as they perform on Islamist extremism,” she added.

Ms Cooper said the steps were a “necessary first step” and ought to be bolstered by separate regulation and monetary penalties for companies which were slow to eliminate material.

“We all know the dreadful consequences there may be whether hateful, illegal and violent material is allowed to proliferate,” she explained.

This activity went farther than the constraints placed on Britain First for breaking up the website’s community criteria, after its web pages were eliminated.

The most recent move comes shortly after Facebook stated it’d block “praise, representation and support of white nationalism and separatism” on its own primary program and Instagram.

Some figures, for example Tommy Robinson, are subject to bans on the media.